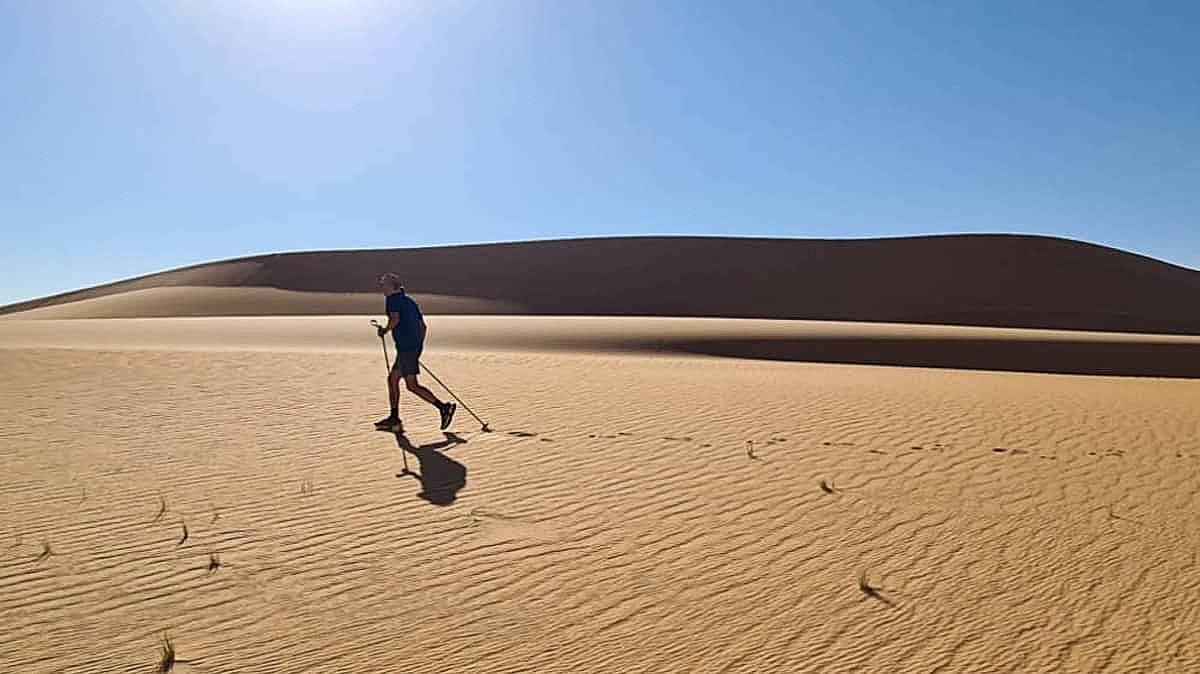 Finnish adventure runner Jukka Viljanen has set out to be the first person to run across Rub’ al Khali desert in Saudi Arabia. The area is the largest continuous sand desert in the world, and the running distance is 1300km.

Jukka started his first attempt on Dec 6th and was planning to reach the final destination around new year. However, he was unfortunately forced to suspend the expedition due to knee problems that stopped his run on the third day in the desert. He intends to return in the beginning of January, 2023.

The Finnish national broadcasting company Yle followed Jukka’s adventure on a dedicated project page (in Finnish) with regular updates from Jukka and his support team as well as a live dashboard that showed data from Movesense sensors. Despite the early termination of the run, both Yle and Jukka were very happy with the experience.

– It was an amazing adventure even if I could’n complete the actual run, said Viljanen after returning to Finland.

– Rub’ al Khali is the most wonderful place I’ve ever been to! Sunrises and sunsets were unforgettable and the sand had an incredible amount of different shades and shapes. I will definitely be back in a year from now.

– We learned a lot and I will come back stronger than ever. The conditions are difficult to train in Finland but I’ve already booked two training camps in Saudi Arabia. The first one coming in March, Viljanen confirms.

Movesense sensors were measuring Jukka’s steps, heart rate and movement intensity, and they were used to mark various events and external conditions to the live data stream. The data and the conditions were shown on a live dashboard on Yle Sports website.

– The project showed that there is a big demand for content that goes beyond traditional performance sports and result reports. Already on the second day, the article was the most popular piece of content on Yle Sports website. We could safely say that, on that day, it was the most popular sports content in all Finland, says Kivimäki.

– The audience reacted very positively to the story. They rated the content over 4.8 on scale of 1-5 and wanted to see more similar projects in the future. Many viewers watched the numbers on the dashboard for long periods of time, following Jukka’s step count increasing and heart rate going up and down, Kivimäki reveals.

The versatility and agility of Movesense surprised Yle

– The versatility of the sensor truly exceeded our expectations. It’s amazing what you can measure with just one sensor. Only imagination is the limit. We now utilized only a fraction of the sensor’s potential but we will certainly come up with new ideas in the future.

– We were also impressed by the professionalism of the Movesense team, the level of finish of the data measurement and transmission system, and how quickly it was possible to implement this project. It’s a really good starting point for our upcoming projects, he continues.

The setup that was used in the desert included one Movesense sensor worn by Jukka Viljanen that was continuously sending his heart rate, step count and movement intensity (movement data was not shown on the live dashboard). Two sensors in the support car were used by the staff to mark different events and external conditions during the run to the data stream.

All sensor data was received with a Raspberry Pi computer that was running a Movesense Gateway application. The computer was connected to a satellite phone that provided an Internet connection to send the data to a cloud server. GPS location was measured with an external receiver attached to the computer and transmitted via the Movesense Gateway.

The satellite connection was operated by Savantum, a Finnish provider of satellite phone solutions, and the data was visualized by Yle’s regular partner Wakeone. The featured image is taken by Savantum’s Pentti Kotiaho who was Jukka’s main support person during the run.

This set enables lightweight implementations for sending and visualizing custom sports data from almost any sport and event at a much lower cost than most established systems for the same purpose. In most cases, the gateway can run on a mobile phone or on a computer that is directly connected to the Internet.

If you are interested in learning how to make your event more interesting to the audience with Movesense, drop us a note via info@movesense.com.

To learn more about the desert run, read our earlier article where the project was announced and we were building the solution.