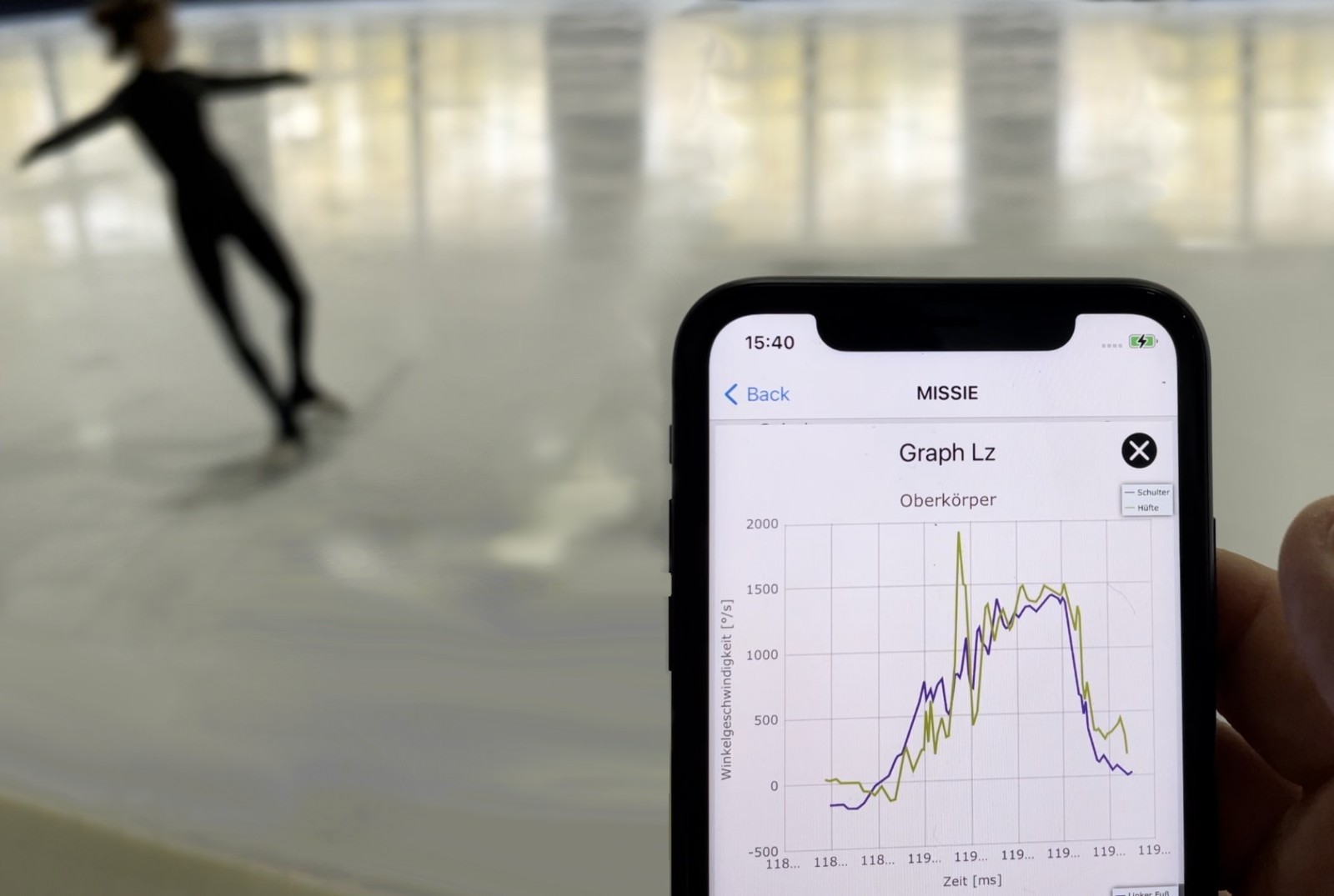 The goal of the project Missie was to create an easy-to-use, reliable and affordable system for DEU coaches to improve the jumping skills of upcoming athletes. The solution consists of four Movesense HR2 sensors attached to the athlete, and a mobile application that shows the results.

The sensors are placed under each skate, on the hip and on the upper back at shoulder level. From the combined signals of the four sensors, the application classifies different figure skating jumps in real time, such as toe loop, Salchow, Lutz, Axel, flip, and their combinations.

With the application, coaches can give athletes immediate feedback on performance. During the training, the coaches get the key information about the jumps for guiding the athletes. This includes comparison of jumps and real time graphs of jump data.

After the exercise, the application offers a wider summary with detailed statistics of the exercise that help manage training load. The app also calculates eleven relevant parameters of each jump, including rotation speed at hip and shoulder, flight time, time of support and rotation angles.

According to the examination of validity during the project, the system reaches up to 98% recognition accuracy of different jumps. Now that the accuracy has been verified, the system will be used in the training of all DEU athlete groups.

— The Missie system is developed to be used by our coaches next to the ice while doing their daily practice sessions. Therefore our coaches are able to improve jumps with multiple rotations and jump combinations more efficiently. It´s supposed to be a big benefit for us and the long-term development of our elite athletes, says Philipp Stärz, DEU National Coach Science.

The project started in the University of Stuttgart that laid down the foundation for the success of the project. Kaasa solution GmbH has been responsible for the development of the application and the analytics in the later phase of the project.

During the development phase of the system, its functionality was refined by collecting and analyzing data from thousands of jumps. Ease of use was an important criteria of the development. In ice training, good wearability and lightness of the sensors is essential so that they do not disturb the athlete’s performance or cause discomfort during the training. Movesense sensors meet these needs perfectly, and Movesense also helped the project by producing suitable accessories to wear the sensors.

— The development process was very demanding and resulted in a lot of knowledge of the Movesense sensor system and its capabilities. The easy to use system for a complex real time analysis of figure skating is a great result. A next step will be more in depth machine learning or neural network implementations. We are very grateful for all the young athletes who jumped so many times to achieve this, recaps Nico Kaartinen, CEO of Kaasa.

The project was funded by the Federal Institute for Sports Science of Germany (www.bisp.de). See a video of the system in action on YouTube.

This figure skating sensor project is a great example of how Movesense enables the creation of new wearable sensor solutions for use cases that would not justify the investment of developing new sensor hardware from scratch. The sensors are available in mass quantities off the shelf, developer tools and sample code are in place,  To discuss how you could use Movesense sensors in your own project, get in touch with the team right away!